When arteriosclerosis is left unchecked, heart failure is inevitable.  The transportation systems constitute the arteries and veins of the urban body.  Their clogging undermines the health of urban life and prevents sustainable development.  A good example is the increasing volume of traffic through Ontario’s "golden horseshoe", which is an international artery.  Here the high number of commuters in the grater Toronto area is compounded by the vehicular traffic between Canada and USA and the growing number of visitors to Niagara Falls.  The main issue in “clearing this artery” is the environmental impact of expanding the existing highway, or of developing a parallel railway.

Traffic demand on highways could be reduced by incorporating an elevated Light Rapid Transit (LRT) monorail over their median and/or shoulders. This would not require additional land and the environmental impact would be minimal.  It would also make more efficient use of the highway no man’s land and infrastructure. 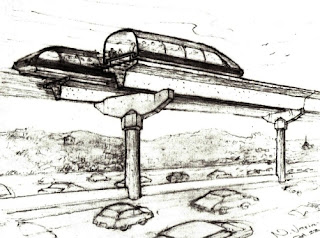 The entire structure can be prefabricated, transported and constructed with minimal disruption to the highway traffic.  A specially developed erection crane completed with a drilling machine could access the median from the shoulder without having to close any lanes.  The system of piers and beams could support a conventional electric train, yet it would make sense to provide for a possible future conversion to the higher speed and safer magnetic levitation system.

It would make sense to invest into manufacturing facilities which would produce all necessary components.  This could be done in a cost effective way in partnership with major contractors, precast manufacturers and steel fabricators. The cost of the plants and equipment shall be viewed as a onetime long-term investment.  Considering all the elements involved, this project would bring a much needed and long term economic boost.

At last, but not the least, Mother Nature would benefit.  The biggest harm that the highway network has caused to her, even more than noise and air pollution, is the fact that it has produced its fragmentation.  The world’s flora and fauna, originally functioning as a cohesive living organism, have been reduced to ever shrinking islands, with growing physical restrictions on wildlife.  In time, by transferring the traffic load from the ground to the elevated trains, the old highways could be scaled down to correct the damage done to the natural environment.  Only two-lane low speed roads may be preserved for local traffic, service and to access the train stations and parking lots.  Wildlife will be free to cross and move freely again throughout the land.

Existing carpooling parking lots and overpasses at main intersections would be connected to the train stations to be built above the highway.  A future interchange and mobility hub would look something like this: 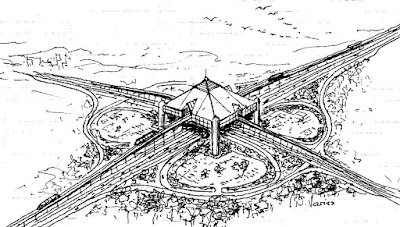 The LRT mobility hub can be expanded into a mini-mall with essential services, public amenities and commercial space.  This opens the door to the creation of a local Public-Private Partnership for its development.

Thanks to its minimal environmental impact, this concept is an ideal solution for sustainable transportation thought-out North America.  There are numerous elevated light trains already running in the world, and many more are planned, yet this concept of redeveloping the existing highway infrastructure is unique and would bring Canada and USA into the spot light of modern transportation.

An elevated railway would make public rapid transit along the highways more convenient and less costly than driving; this is the only way of breaking the vicious circle that people are presently trapped in.  Such a revolutionary transportation system will help people abandon their dependency and addiction to the automobile.  The present measures are insufficient because bad habits seldom change voluntarily.  Higher gasoline prices discourage driving, but most commuters do not have a practical alternative to driving to work.  This alternative must be created first by smart governments.  What wiser choice of spending could there be than for a better and healthier quality of life?  It will bring great economic, social and health dividends.

The metamorphosis of highways could begin.